Why Your Doctor Might Want To Track Your Tweets 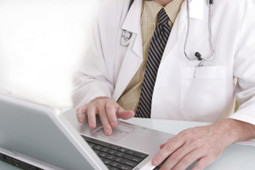 The little digital breadcrumbs you blithely leave in your wake — the tweets, the online searches, and communities you join, the wearables that account for every step and bite — are beginning to coalesce into what could ultimately become a critically important portrait of your true physical and mental state.

At least that’s what John Brownstein of Children’s Hospital Boston and his colleagues argue as they analyze and collect these “breadcrumbs” amassing a wide spectrum of data to support a broad new concept of personal and public health that they call the “digital phenotype.” It’s like a contemporary extension of the more traditional phenotype — one’s observable characteristics based on a mix of genetics and the environment.

In a sort of digital phenotype manifestopublished earlier this year in the journal Nature Biotechnology, Brownstein, an epidemiologist and associate professor at Harvard Medical School and chief innovation officer of Children’s Informatics program, and others, explain the idea like this:

…there is a growing body of health-related data that can shape our assessment of human illness. Such data have substantial value above and beyond the physical exam, laboratory values and clinical imaging data — our traditional approaches to characterizing a disease phenotype. When gathered and analyzed appropriately, these data have the potential to fundamentally alter our notion of the manifestations of disease by providing a more comprehensive and nuanced view of the experience of illness. Through the lens of the digital phenotype, an individual’s interaction with digital technologies affects the full spectrum of human disease from diagnosis, to treatment, to chronic disease management.

Or, put another way: the digital phenotype adds a unique, more fine-grained look at the way people actually live each day.

Here’s one real-world example: Michael Docktor, a gastroenterologist and director of clinical innovation at Children’s Hospital Boston, treats many patients with Irritable Bowel Syndrome and one thing he usually requests is a detailed food diary. “Sometimes teenagers dump a 50-page food diary on me, and it’s hard for me as a human being to comb through that and, perhaps, find that milk, for instance, is a problem.” But, he says, “if we had that information digitally, tracked by software that used algorithms and machine learning to figure out the meaningful correlations and serve it up in an easily digestible format — that could be transformative.”

Brownstein, also founder of the healthmap, a digital tool that tracks infectious diseases around the world through disparate data collection, from eye-witness accounts to government reports. adds: “The digital phenotype gives some insight into health behavior that would otherwise be difficult to obtain during a clinical interaction …The idea that you may see a doctor once, twice a year, and to capture important information on fitness, exercise, sleep, even general happiness, can be challenging. But in fact, a lot of the information we’re streaming can provide useful clinical information.”

The latest crumb of information is this growing field is a study characterizing sleep disorders and related issues through Twitter use. Other digital tracking efforts looked at “the use of cell phone activity to measure one’s activity levels and the association with depression,” researchers note. A study in 2013 looked at links between obesity and Facebook use.

In the Twitter study on sleep issues, published in the Journal of Medical Internet Research, researchers reviewed the contents of tweets to try to discern potential sleep issues.

In an interview, Brownstein says the study began with researchers suspecting that people are constantly complaining about sleep online. So, they wondered, was it possible to investigate overall, social interaction and characterize that core of people with real issus.

“Long term,” he said, “that could fuel research into sleep and sleep behavior and then there’s also the idea it could improve clinical decision making.” He adds: “With this kind of work we’re trying to validate against what we already know…in this case [people with sleep issues had] more negative sentiment, and…are more isolated interms of social interactivity…with some of that validation and real world data, we can think about other ways to investigate sleep and other health outcomes; it could fuel a conversation between a patient and a clinician.”

Here’s more on the study from the Children’s news release:

Researchers from Boston Children’s Hospital and Merck have built the beginnings of “digital phenotype” of insomnia and other sleep disorders based on data from Twitter. This study is one of the first to look at relationships between social media use and sleep issues, and—based on assessments the sentiments expressed in users’ tweets — gives preliminary hints that patients with sleep disorders may be a greater risk of psychosocial issues…

Insomnia and other sleep issues affect between 50 and 70 million Americans. Apart from their impact on productivity, accidents and risky behaviors, chronic sleep disorders also contribute to diabetes, cardiovascular disease and depression.

Historically, population-level research on sleep disorders has relied on survey methods such as the Behavior Risk Factor Surveillance System. However, such methods are time- and resource intensive, expensive, suffer from long lag times before reporting and are not generalizable to the larger U.S. population.

Research based on social media data may help overcome these limitations. To support such research, Hawkins, McIver, Brownstein and their colleagues sought to develop a “digital phenotype,” or baseline profile of what a person suffering insomnia or other sleep disorders “looks” like on social media.

“Sleep deprivation and chronic sleep disorders are not well understood,” said Brownstein. “We wanted to see if we could use new forms of online data, such as Twitter, to characterize the sleep disordered individual and possibly uncover new, previously-undescribed populations of patients suffering sleep problems.”

The research team used publically available anonymized data from Twitter to create a virtual cohort of 896 active Twitter users whose tweets contained sleep-related words (e.g., “can’t sleep,” “insomnia”), or hashtags (e.g., #cantsleep, #teamnosleep), or the names of common sleep aids or medications. They then compared data from that cohort to those of a second group of 934 users who did not tweet using sleep-related terms. The team examined each user’s age, total number of tweets, total numbers of followers or people followed, number of favorite tweets (that is, the number of tweets by others that the user had favorite), length of time on Twitter (that is, how long the user had had an active Twitter account), average number of tweets per day, location and time zone.

The researchers also assessed the time of day and average sentiment—positive, neutral, negative—of each user’s tweets.

Taken together, the data suggest that Twitter users suffering from a sleep disorder are less active on Twitter on average but tweet more during traditional sleeping hours. The increase in negative sentiment in their tweets suggests that sleep-disordered users could be at an increased risk for psychosocial issues.

“These findings are preliminary and observational only, and need to be studied further,” Brownstein cautioned. “But they suggest that social media can be a useful addition to our toolkit for studying the patient experience and behavioral epidemiology of sleep disorders.”

Docktor, the gastroenterologist, agrees that all of this digital tracking is still in its infancy in terms of actually helping doctors practice medicine. Also, he says, issues of privacy are a key concern.

But, he says, the prospects are tantalizing.

“The patients were now seeing are digital natives,” he said in an interview. “They don’t have email, they have Twitter and Snapchat. There’s an incredible amount we might learn — especially in patients with chronic illness. I see a patient once every six months or a year, and they remember the last couple of weeks. They don’t remember they were really sick months before — there is so much recall bias. But with these technologies…there’s an incredible amount of data being collected by patients in the 99.9 percent of time they are out of hospital, and the real question is how do we passively collect that data to make it meaningful and how do we use that data in a way that’s not totally overwhelming to the medical system and providers.”