« This is a great day for patients »: the Hospital Safety Score 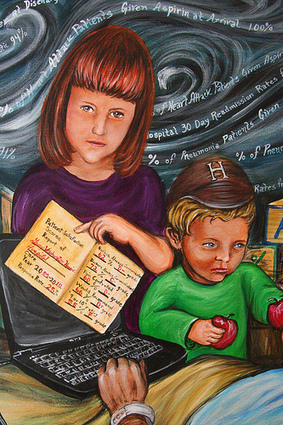 This summer, to my delight, the idea of a report card for hospital quality combined with prior research. Leapfrog debuted its Hospital Safety Score in June. The score uses measures of the Leapfrog Hospital Survey, AHRQ, CDC and CMS to present a single overall score rating patient safety. They also use additional data from AHA annual survey to allow for as much credit as possible toward the hospital safety score. Which is really nice in view of the letter that AHA president RichardUmbdenstock wrote in June attacking the methodology Leapfrog was using. Leah Binder president of Leapfrog wrote a response letter that explained the methodology and clarified each point.

Today Leapfrog launched the iPhone/iPad and Android app for Hospital Safety Score. They also released information from hospitals that were not ranked in June. There were some surprises to be seen and now a few D’s and F’s. There are several rating systems in the market, but Leapfrog is free to the public and is designed for ease of patient use so each family can find the safest hospital in their community.

· A wide range of hospitals earned “A’s,” with no one class of hospitals (i.e., teaching hospitals, public hospitals, etc.) dominating among those showing the highest safety scores. Hospitals earning an “A” include academic medical centers New York Presbyterian Hospital, Brigham and Women’s Hospital, and Mayo Clinic. Many rural hospitals earned an “A,” including Geisinger Medical Center and Blessing Hospital.

· Hospitals with myriad national accolades, such as Massachusetts General Hospital, Duke University Hospital, and Cleveland Clinic Florida each earned an “A.”

In analyzing statewide performance, both Massachusetts and Maine showed outstanding hospital safety results. With 83 percent of Massachusetts hospitals and 80 percent of hospitals in Maine awarded “A’s,” it’s clear these states have each put a priority on safety in hospital care.”

But it is not such a great day for the residents of the state of Maryland. That state along with districts Puerto Rico and Guam do not report data to CMS on Patient Safety. So if you are trying to compare Maryland hospitals you are out of luck.

Three years and eight months ago I sat at a computer trying to compare hospital facilities while my husband Fred was hospitalized in Maryland with stage 4-kidney cancer. I could find very little information then and I was shut down by pay walls. Now I know a great deal about facilities, how to research and Hospital Safety Score is a free service. If I want to pick a hospital with an “A” rating on the border of DC and Maryland, I guess I would go to Sibley, because I know the score. I hope hospitals in Maryland think about that and consider voluntary reporting to Leapfrog.

As ePatient Dave DeBronkart would say, “Maryland, Give Us our Damned Data.”