The Age of ‘Wearatronics’: Advances for remote patient monitoring 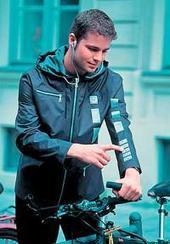 In the beginning there was the triode, a vacuum-tube that heralded the early age of electronics. However, this age was limited because the triode was relatively bulky, required a lot of energy and, since it was made of glass, extremely fragile. Its replacement, the solid state field-effect transistor, was perhaps the greatest technological leap of the 20th century. The transistor reduced the size & power load of electronics while simultaneously improving their durability.We are now entering a new age of electronics, one in which new materials and interconnects have made circuit assemblies flexible (‘Flextronics‘) and, as a result, embeddable. We at Medgadget have been closely following flextronics as well as its subfield of wearable electronics, or “wearatronics,” over the last few years. The fundamental concept is that flexible electronic arrays may be embedded into textiles in order to, for example, measure the wearer’s vital signs or even generate and store power. In this post we would like to provide one timely example and two resources that you may use to learn more about wearatronics and stay ahead of the curve:

MC10, a leading company developing flexible electronics, informed Medgadget that it has signed an R&D contract with the US Army Natick Soldier Research, Development, & Engineering Center (NSRDEC) to “develop solar cells that are directly integrated into the fabric cover of combat helmets and rucksacks.” We have covered MC10 before because of their work on adding conformal electronics to medical devices, such as catheters and stents, and are interested by this new partnership that more directly relates to embedding electronics into textiles. Their CEO, David Icke, explains the recent move:

Soldiers today carry a lot of high-tech gear, but often go long periods of time without access to power. MC10 is providing a renewable power source that doesn’t add to the heavy load our soldiers already carry.

Given MC10′s existing partnerships with Reebok, Mass General Hospital, and others, we can expect to hear more about their work in the field of wearatronics.

In terms of the resource to learn more about wearatronics, our colleagues at GigaOm just released a research briefing earlier this week entitled “The wearable-computing market: a global analysis.” One highlight from the report is that the wearatronics market for just health and fitness products is estimated to reach 170 million devices within the next five years. We’ve quoted the report summary below:

What do Google’s Project Glass, Zephyr Technology and the Hug Shirt have in common? All are examples of wearables: computing devices that are always on, always accessible and easily worn on the body. With the growth of sensors and microelectronics, the potential uses of wearable-computing technologies now reach to health and fitness, gaming, fashion, disabilities and augmented reality. Most importantly, the widespread adoption of wearables will drive the form function and market for mobiles in vital ways. This report provides a historical background, an overview of the technologies in the wearables market and possible future trends as the market expands.