Is Social Media the Medicine that Healthcare Needs? [#Infographic] 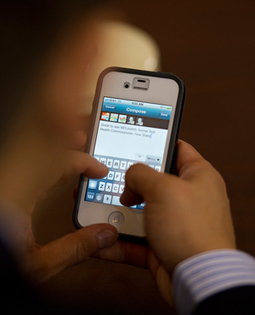 According to new research from the University of Sydney, micro-blog-based services such as Twitter could be a promising medium to spread important information about public health.

The research, by Professor Robert Steeleand PhD candidate Dan Dumbrell, indicates social media networks such as Twitter have distinct and potentially powerful characteristics that distinguish them from traditional online methods of public health information dissemination, such as search engines. This research is part of Professor Steele’s broader investigations on the impacts of emerging technologies on health and health care.

« Twitter has a powerful characteristic in that that it is members of the public who distribute public health information by forwarding messages from public health organisations to their followers. »

According to Professor Steele, this provides a new way for public health organisations to both engage more directly with the public and leverage individuals’ networks of followers, which have ‘self-organised’ by topic of interest. Major social networks currently have hundreds of millions of users and continue to grow rapidly.

While most public health information is sought through online search engines, it has previously been found that relevant public health documents are not always successfully located and disseminated due to the user’s search methods.

Important public health information that may benefit from micro-blogs could include communicable disease outbreaks, information about natural disasters, promotion of new treatments and clinical trials, and dietary and nutrition advice.

« When you look for information on a search engine, algorithms and computers determine the most important results. With social media networks, you have a ‘push’ mechanism, where interested individuals are directly alerted to public health information. You also have a prodigious network of users whose time and effort to find and follow relevant accounts, and to filter which information is forwarded or retweeted represents a powerful aggregate human work effort. »

The researchers examined a sample of more than 4,700 tweets from 114 Australian government, non-profit and for-profit health-related organisations. Each of the tweets was categorised according to the health condition mentioned, the type of information provided, whether a hyperlink was included, and whether there were any replies or retweets.

Non-profit organisations made up almost two-thirds of the group, and had a much higher average following than their for-profit counterparts. The majority of tweets in the sample, 59 percent, were non condition-specific, followed by tweets about mental health, cancer and lifestyle (fitness and nutrition).

« Most major health conditions were present in the twittersphere, but we were somewhat surprised by the proportions, » says Professor Steele.

« Four of the government’s National Health Priority Areas were underrepresented in our sample, including asthma, arthritis and musculoskeletal conditions, injury prevention and control, and obesity. These conditions only made up 1.7 percent of health-related tweets. »

For-profit organisation tweets were dominant in the maternity, pharmaceutical and dental areas, most likely because of their potential as a source of commercialisation or potential profit.

However, despite having the largest average number of tweets, for-profit organisations also had the lowest number of average followers, indicating consumers were more likely to reject sites they considered promotional or sales-based.

Non-profit Twitter accounts provided the majority of tweets in the sample, with a large number of fundraising and awareness-raising tweets.

However, despite having a far lower average number of tweets, government accounts were found to be the most successful at disseminating public health information, with the greatest number of average followers and re-tweets.

There were also a number of common characteristics to highly re-tweeted public health advice tweets. Actionable tweets, which provided readers with information to act upon in relation to their health, were highly successful, along with time relevance and relation to particular events, a personally directed style of language and rhetorical questions.

Interestingly, perceived acuteness of health risk and need for others to be informed also drove information dissemination.

« The real-time insight Twitter gives us into exactly how consumers react to and spread public health information is unprecedented, » says Professor Steele.