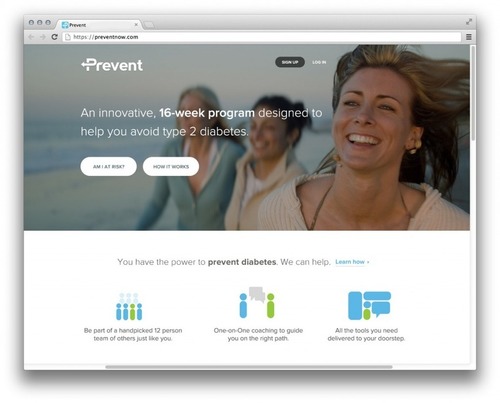 The landmark Diabetes Prevention Program (DPP) study was published in the New England Journal of Medicine on February 7, 2002, a bit more than a decade ago.  It demonstrated conclusively that progression from prediabetes to diabetes could be prevented by weight loss and increased physical activity (oh no, not that again!).

The results of this study were impressive.  Individuals randomized to receive “intensive lifestyle modification” had a mean weight loss of 7%, reduced the prevalence of diabetes by 58% in the overall group and by 71% in the group over age 60. The now popular diabetes medication, metformin, also reduced the risk of developing diabetes, but not nearly as much as the healthy behavior changes.

So here we are, once again, facing the cold hard truth that when it comes to diabetes and obesity (aka “diabesity”), changing bad behavior is the essential work that needs to be done – by patients, their families, clinicians, and, I would add society as a whole, if we are going to make a dent in the epidemic.

It is not going to be easy and it is going to be expensive – but not, my dear readers, as expensive as continuing the status quo. A September 2011 paper in Health Affairs (30:9, 1673-1678), authored by Kenneth Thorpe and Zhou Yang, estimates that Medicare alone could save $1.8-2.3 billion over the next 10 years if prediabetics, aged 60-64, were enrolled in a community-based program similar to the National Diabetes Prevention Program.  Depending on how broadly program eligibility is defined, savings could be as high as $7 to $15 billion.  Failure to enact such a program means that we would spend that money.

So what exactly is “Intensive Lifestyle Modification?”

The original DPP intervention was a sixteen-lesson curriculum that covered diet, exercise, and behavior modification.  It was taught one-on-one over the course of 24 weeks by registered dietitians or trained case managers with master’s degrees (hmmmm, seems a bit of overkill to me – even my mama told me to eat my fruits and veggies.)  In addition to the personal trainers, participants received ~$100 per year to spend on exercise classes and videos, healthy cookbooks and the like.

I remember colleagues at the time the original DPP study was published saying, “interesting, but way too expensive to work in the ‘real world.’”  In an effort to make the DPP more affordable, the YMCA of the USA created community based programs that retain the principles of the original program, but reduce the cost by enrolling people in groups of ten to twelve in a 16 week program that cover the same material.  They also eliminated the subsidy for classes, videos and books.

A randomized trial (the DEPLOY pilot study) found the (pardon the pun) skinnier version of the DPP delivered almost the same results as the original, but it cost more than $1100 less per person per year (Am J Prev Med 2008, p 357-63).  But we are still talking about a relatively expensive brick and mortar program.   What if the DPP could be moved out of a building and onto the web?

Today, December 11, 2012, is launch day for this Silicon Valley startup founded by CEO Sean Duffy and friends.  I first met Sean at FutureMed and later reconnected via activities at Rock Health – the San Francisco based startup accelerator where the company was incubating.  What he told me in our first conversation shocked me.  He was, he said, on a leave of absence from Harvard – one of the most prestigious Medical Schools in the country.  Not only that, he had been in the combined MD-MBA program.  In my medical school days, we would have considered voluntarily leaving such a program the act of a mad man.  Medical School was THE educational prize of my generation – you would have given your eyetooth to get in and you never, ever, ever would have dropped out (sorry, Sean, taken a leave of absence.)

But I soon learned that this guy was not and is not a mad man – he is a brilliant, hard-working entrepreneur who has taken on one of the most important health issues of our day and created a great digital solution.  It is aptly called Prevent.

Prevent combines the evidence-based approach of the original DPP with the convenience and efficiency of internet.  The Omada team worked with an interdisciplinary group of technologists, entrepreneurs and clinicians from Google, Amazon, IDEO, Harvard, Stanford, and Columbia to create an accessible technology with the potential to prevent disease and promote health.  They also attracted an outstanding group of Advisors, including endocrinologist Dr. Anne Peters, from USC and Dennis Boyle, Co-Founder of IDEO.

Like the original program, Prevent has a 16 lesson curriculum that, according to their fact sheet, is “scientifically-supported, and uses cutting-edge principles of behavior change in a way that’s fun and engaging.  Participants are divided up into small online groups based on age, BMI and location.  Each participant is mailed a “no-setup” wireless scale that automatically transmits daily weigh-ins to private personal profiles.  A pedometer tracks daily activity.  Each participant receives one-on-one telemedicine support from a professional health coach.

Sean told me, “this is not a static replication of the on-the-ground experience.“ Rather it paints a post digital post card for the patient of how they will look and feel after completing the program. “Imagine yourself in 16 weeks, he said, “new friends, new clothes, more energy…and we show you a structured timeline to get there.”

Getting the DPP to Scale

Although some people may prefer to have this intervention delivered in person, others may not.  Community-based, in person programs require centers to administer them, a population of potential clients located near those centers, and, of course all the overhead that goes with brick and mortor anything. The future of the DPP at scale, Sean said, is using the web.  This seems like a no brainer to me…think Amazon, Zappos, Kahn Academy, etc. etc. etc.

Part of getting to scale is finding the right reimbursement model.  Although Omada will be offering Prevent direct to consumer for $480 for the 4 months program (comparable to other leading weight loss programs), their biggest market will be insured people, particularly now that the Accountable Care Act is not as endangered as it was pre-election.

On this front, Omada has what appears to be almost perfect timing.  Senate bill 3463 was introduced on July 31, 2012.  This bill proposes that “a qualified diabetes prevention program” be offered as a Medicare covered benefit (100% coverage – no co-pay or deductible) if I am reading it correctly.  And, we all know that Medicare Advantage plans and commercial insurers are likely to follow Medicare’s lead on this.  According to Sean, United Health Care is already paying for on-the-ground DPP programs.

From a business perspective, THIS IS BIG.  Someone besides the consumer is going to pay for the program – this is the big jackpot all healthcare care entrepreneurs hope for (eat your hearts out, guys). Also good timing for this young company is the emergence of new models of care and reimbursement, such as Accountable Care Organizations, that will be rewarded for improved outcomes and lowered cost of care.

If Omada can meet the criteria to be a qualified program, they will have achieved the dream of every health care startup entrepreneur I have talk to  – being a coveted “covered benefit.”

So, Does it Work?

It is one thing to say you are going to build an online health program that mimics an in person program known to work.  But, if you build it, will they use it?  And if they use it, will it deliver the same results?  Omada smartly designed a study to test Prevent’s efficacy early on.  Although only a pilot – and not a “gold standard” randomized controlled design, the results of its recent 230 person trial resulted in an average weight loss of 13.7 pounds (or 6.5%) – almost the same as the original DPP study results.  Pretty good.  Of course, an important question is whether the weight loss is sustainable overtime – the company is in the process of evaluating their 6 months results.

Ok, so I really like what Omada Health is doing.  It is not just a technology solution, as Sean told me, “it is really a human social connection solution – it brings together all of the elements that exist in our current siloed health care world.”  The Omada platform has the potential to be applied to other chronic conditions.  And, it isn’t just Omada that I am crazy about – it is the entire mHealth world of young (and not so young) entrepreneurs – physicians, nurses, physical therapists, pharmacists joining hands with software engineers and experts in design and user experience to create a new, more accessible, more consumer friendly and hopefully more effective health care delivery system.  Now that is real reform