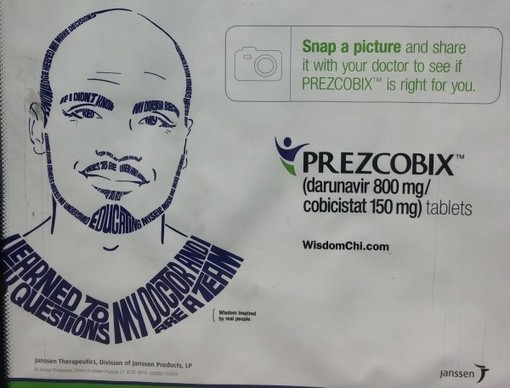 Patient engagement is one of the big buzzwords in healthcare of late, getting at least lip service from providers nationwide. Now, with a touch of social media, it’s finding its way into pharmaceutical marketing.

I came across the above ad at a bus stop in Chicago. It’s for Prezcobix(darunavir/cobicistat), a relatively new HIV medication from Johnson & Johnson subsidiary Janssen Therapeutics. (“My status” apparently is code in the HIV/AIDS world for knowing whether one has tested positive or negative for the virus.)

The “I asked my doctor” part is nothing new in direct-to-consumer pharma advertising, but take a look at the bottom half of the panel.

The words below the man’s neck say, “I learned to ask questions,” and, “My doctor and I are a team.” (Too bad the left edge of the ad is obscured by the frame border.)

The latter statement is telling. This ad, at a bus stop not far from the center of “Boystown,” one of Chicago’s most heavily LGBT areas, is instructing people with HIV that care of their disease is a team endeavor, not just a one-way conversation with their physicians. But it could easily apply to anyone who has a serious health issue.

The rest of the text, known as a “typographic illustration,” according to the artist, who did several of these drawings in English and Spanish for Janssen, contains similar empowering messages.

“The campaign’s theme is helping people living with HIV tap their inner wisdom for the HIV journey, which is based on the insight that managing HIV requires information and support, both from healthcare professionals and from others living with this disease,” Janssen Therapeutics spokeswoman Lisa Vaga explained in an e-mail.

“Janssen Therapeutics has long been committed to focusing on patients as well as their healthcare professionals, particularly by providing resources and support. So engaging with people living with HIV was a natural extension of this commitment,” Vaga added.

And then there’s the part of the ad that says, “Snap a picture and share it with your doctor to see if Prezcobix is right for you.” That’s a modern spin on the “talk to your doctor” language that is a staple of DTC pharma advertising, and it seems to encourage a form of social media.

People may not be Facebook friends with their physicians and may not want to broadcast their HIV status on Instagram, but smartphones obviously have become the locus of social media for millions. Showing your doctor a photo of the ad is social media; you are just choosing to share with a single person or practice, and doing it in person rather than on the Internet.

“With the prevalence of camera phones, it’s another tool to help people living with HIV foster a discussion with their healthcare professionals,” Vaga explained.