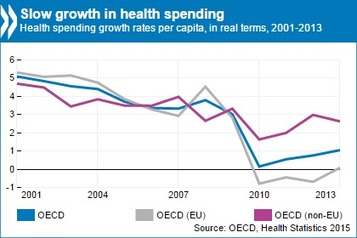 Many European countries saw further reductions in health spending in 2013, according to OECD Health Statistics 2015. Health spending continued to shrink in Greece, Italy and Portugal in 2013. Most countries in the European Union reported real per capita health spending below the levels of 2009. Outside of Europe, health spending has been growing at around 2.5% per year since 2010.