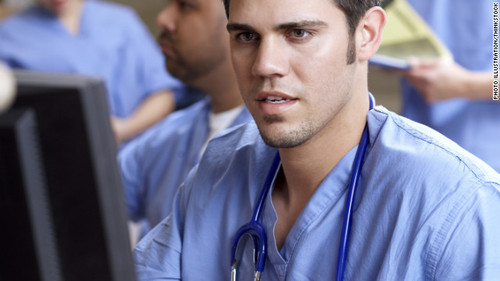 Facebook isn’t just for connecting with friends – doctors are finding uses for the social network in diagnosis.

Doctors from the Mayo Clinic used the social media site in investigating the stroke of a 56-year-old woman. They published a report about it in the journal BMJ Case Reports.

The patient had a clogged artery in her neck that needed to be opened for treatment. This type of stroke, called ischemic, happens because of reduced blood flow to the brain as a result of narrowed or blocked arteries.

There are usually two main causes of this blockage: One is trauma, which is more common in young people. The second type comes from risk factors such as diabetes, heart disease, high blood pressure and high cholesterol. The Mayo Clinic patient did not appear to have a history of these risk factors, or a history of trauma.

Dr. Manoj Mittal noticed that the woman’s right eyelid was droopy and her right pupil was slightly smaller than the left. The doctor asked the woman and her husband if this was abnormal for her; they said they weren’t sure.

These symptoms may be associated with injury to a neck artery – in other words, through trauma.

“That made me think, if I can establish whether this is new or old, that can help us figure out what was the main cause,” Mittal said.

Mittal asked for the patient’s driver’s license, but it was old and torn. He couldn’t clearly see her eyes. The patient didn’t have any other photos with her, or on her phone, but said she had photos on Facebook.

The patient showed him several different profile photos from Facebook, giving Mittal recent examples of what she looked like. He discerned that her eyes were more symmetric in the photos – taken within the previous few months – than they were after the stroke.

Based on this information, it appeared more likely that the stroke had happened because of trauma.

Although the woman had said she hadn’t experienced any trauma, Mittal then asked if she had been to a chiropractor lately. There is some association between chiropractic manipulation and stroke, although it is not a definitive link and studies have shown contradictory evidence.

She had gone to a chiropractor because she had neck stiffness, and had spinal manipulation to treat that, two days before the stroke.

Doctors had already treated the patient for the stroke before the Facebook revelation, but it’s important to know the cause for the purposes of preventing a second stroke, Mittal said.

“If we did not know that she had any trauma or anything, it’s very hard to explain why she had a stroke,” Mittal said. “Once you why the stroke happened, it’s more comfort for the patient.”

Because of the early intervention she received, the patient had a good outcome, and was discharged after five days in the hospital, Mittal said. When she first came to the ICU, she had slurred speech, droopiness of the face and complete paralysis of the left side of the face. But after hospitalization, the paralysis had gone away, although she still had some symptoms.

Younger patients always do better for a stroke, and timing is crucial, Mittal said. She got IV medication within two hours of the onset of her stroke, and intervention was done relatively quickly. When a blood vessel is blocked in the brain, the chances of recovery are higher the quicker the person gets to the hospital.