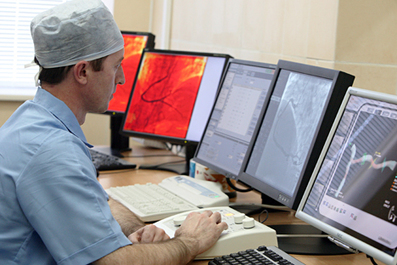 The Russian website, Doctor at Work, has become the world’s most-visited social network for doctors. However, because of the sanctions, it is not planning on expanding to Western markets. Experts think the company has good development potential in Russia, although these prospects could be hindered by cuts to medical staff and the current economic crisis

The social network Doctor at Work has attracted more than 350,000 users, about 42 percent of all Russian doctors, in just five years. The business generated $500,000 in profit with revenues of $1.5 million in 2013. It had originally planned to go global, however, because of the sanctions the network has decided to keep its strategy local for now.

The idea of creating an internet community where doctors could share their experiences occurred to endocrinologist Andrei Perfiliev in 2009. He implemented the project with his partner, entrepreneur Stanislav Sazhin, who was in advertising at the time but wanted to establish his own business.

Initially, the entrepreneurs planned to make a website featuring scientific articles for doctors. But after polling 2,000 specialists, they saw the need for a social network for medical professionals.

“Russian doctors usually work at several clinics,” Sazhin said. “They spend three to five hours a week online and would like to spend that time consulting with their colleagues on how to use certain drugs and treat patients with certain symptoms.”

Within three months, Perfiliev and Sazhin had launched the resource with a simple interface by investing $9,000 of their own funds in the project. Only doctors had access to it. When registering initially, doctors were prompted to fill in educational information and place of work, but later the website’s administration started contacting universities and clinics to confirm details, bringing the site greater legitimacy.

At first, Sazhin and Perfiliev attracted users by directly communicating with doctors at clinics. However, the process was slow. In the first four months Doctor at Work attracted only 1,000 users. The partners began engaging doctors through specialized groups on the Russian social networks VKontakte and Odnoklassniki bringing total users to 30,000 within a year. However, they began encountering problems with monetization in 2011.

“There are essentially two monetization models for medical social networks in Russia and abroad: promoting medications and recruiting doctors for advertisers,” Sazhin said. “We decided to go with the first option.”

At first, drug producers were not interested in working with the social network. According to Sazhin, they wanted to advertise their products in a targeted way; for example, by promoting heart medications to cardiologists in Ekaterinburg. The entrepreneurs realized that they needed to aggressively boost the number of Doctor at Work users. Since 2009 the company has spent roughly $1.5 million on promotion achieving favorable results. According to Alexa.com that provides analytical insights on the web, Doctor at Work is now the most visited social network for doctors in the world.

Doctor at Work had a stroke of luck in 2012 when medical representatives in Russia were legally banned from approaching doctors and advertising drugs during business hours. Pharmaceutical companies saw their promotion channels narrow and set their sights on the Doctor at Work website, which was quickly gaining momentum.

According to Sazhin, the drug advertising market on Russian websites has great potential. In 2013 Russian pharmaceutical companies spent $8.5 million on this sector. In the coming years spending may grow to $150 million.

Investors have demonstrated their faith in Doctor at Work. The company raised $3 million from Guard Capital and Bright Capital Digital in March 2014 and another $2.5 million from Aurora Venture Capital in October.

Websites similar to Doctor at Work include American website sermo.com, Japan’s M3.com and doctors.net.uk. The founders had been planning to enter Western markets last year, but were compelled to scrap those plans because of the sanctions and the crisis.

“Foreign investors are now afraid to invest in Russian projects,” Sazhin said. “So we are going to develop in Russia and work on improving our mobile app. Right now, more than 40 percent of doctors access the website via smartphones. We plan to invest roughly $100,000 in product development in 2015.”

According to a spokesman for a Russian investment fund, Doctor at Work’s revenue will increase by a modest 10 to 15 percent per year because of its decision not to pursue Western expansion. “Reduced medical staff at state-run institutions in Russia and a decline in social network activity by practicing doctors will cause minimal growth,” the expert said. “The financial crisis will shrink marketing budgets in pharmacology. Patients will minimize their spending and buy cheap medications. Purchasing power will decline among Russians as a whole. Plus, there will be a decrease in advertising budgets in the pharmaceutical industry.”