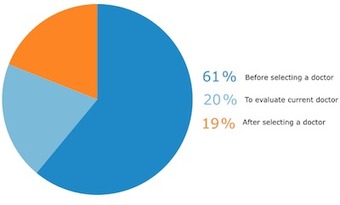 Clear trends in physician reviews and consumer purchase decision patterns have emerged for healthcare marketing professionals. A physician’s online presence may soon become a necessity to attract and retain patients, according to practice management research group Software Advice’s 2014 survey of over 4,600 US healthcare consumers.

But, compared to the previous year’s survey, the trend is strong and we have probably moved past the “soon” stage to “now.” Key findings from Patient Use of Online Reviews IndustryView | 2014 include:

As healthcare becomes increasingly patient-centric, empowered consumers regard good reviews as important as being in-network.

The weight online reviews is significant to patients before they select a prospective doctor, and significantly, as a measure to evaluate their current doctor, according to the Software Advice data.

“Our survey found that the majority (61 percent) use them prior to choosing a doctor. However, a slightly greater percentage of patients in 2014—20 percent, up from 19 percent in 2013—say they use online reviews to evaluate their current doctor.

“Doctors should be aware that both current and new patients may be using reviews to evaluate their performance, and thus having a positive online presence on review sites is a step toward not just attracting patients, but retaining them.”

Quality of Care and Delivery of Care…

The entire Software Advice Survey for 2014 is informative reading for doctors and marketing professionals. Among their conclusions: “Our survey findings indicate that having online profiles and positive patient reviews is not only desirable for physicians, but may soon become a necessity to attract and retain patients, particularly as the healthcare arena becomes increasingly patient-centric.

“Physicians should also keep in mind that negative reviews are not nearly as prevalent as many think. Most reviews are positively motivated, so focusing on increasing the quality of care via improved diagnostic accuracy and listening skills is, according to our data, the best way to ensure a greater number of positive reviews.”